Blog > Engineering > An Example of How Node.js is Faster Than PHP – Part 2

An Example of How Node.js is Faster Than PHP – Part 2

An Example of How Node.js is Faster Than PHP – Part 2

Summary
Learn more about the test and results of Node.js vs PHP and discover the reasons why Node.js is faster than PHP.

In my previous post I installed and configured Ghost (a node.js based blogging platform) and WordPress (a PHP based blogging platform and CMS). The purpose of that blog post was to test relative performance of the 2 platforms to see which one could handle more load. The test doesn’t compare like code between node.js and PHP, but instead was designed to understand what platform was faster from a basic blog functionality standpoint.

The result of the first set of tests was that Ghost was 678% faster than WordPress in their “out of the box” configurations. The test and results spurred a lot of interesting dialogue with many people requesting another test where an opcode cache was in place for WordPress. So that is exactly what this next blog post is about.

I fired up the exact servers that I had used in my last round of testing so I have the same configuration as in my original blog post. For this set of tests I stuck with Apache as the web server for both Ghost and WordPress. I also added APC opcode cache by following the instructions in this blog post. It was pretty easy and painless getting APC installed and functional and it definitely made a nice difference in the performance of WordPress.

As before, I used Siege to apply load to the platforms. As a reminder of our WordPress baseline I ran a load test on Apache + WordPress first without the APC opcode cache. Those results are shown below.

This load test resulted in 100% CPU utilization just as we had seen in my last blog post. I load tested Apache + Ghost again so that we could compare the base configurations and those results are shown below. As expected Ghost had a much higher transactional throughput ~654% more than WordPress. So now came the real fun. Configure PHP to use APC, restart Apache, and restart the load test. Those results are shown below. Much better results for WordPress this time with ~159% improvement in throughput over WordPress without an opcode cache. Transaction response times were also much better showing with ~70% reduction in shortest response time and ~63 percent reduction in longest response time. That’s a nice performance gain for a small bit of work installing and configuring APC. I have included a couple of screenshots for those who are curious about key cache metrics (notice the high cache hit rate)…

It’s worth mentioning that the CPU load did not decrease while using the opcode cache during this test. Utilization stayed pegged at 100% for the duration of the test even though throughput and responsiveness improved. Apache and WordPress without any opcode cache (shown below) is respectably fast coming in at .20 seconds for the fastest transaction and .66 seconds for the slowest. That is 1900% and 842% worse than Ghost respectively. The percentages are high but the reality is that the page loads are still fast.

Adding the APC opcode cache to the Apache and WordPress combination clearly makes pages load faster even under light load. You can see below that the fastest transaction took .07 seconds and the slowest took .25 seconds. That’s a very nice improvement in speed. It’s still considerably slower than Ghost response times but at these speeds nobody will notice the difference. 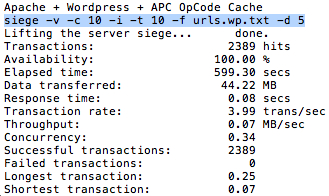 One of the major difference between these two platforms is that Ghost was designed to be just a blogging platform so it is not bloated like WordPress is these days. I love the functionality that WordPress offers but as far as plain old blogging platforms go I think Ghost is going to be pretty tough to beat if you need a high throughput platform.

No matter what programming language is used on a project there will always be good code and bad code. By that I mean code that is efficient and effective (good) versus code that is resource heavy and potentially buggy (bad). If your application isn’t performing the way you want it or the way the business needs it to, then you should try installing AppDynamics for free and figure out what the problems are.