Blog > News > Concluding Thoughts From AppSphere 2015: A Future Transformed For The Better By Technology

Concluding Thoughts From AppSphere 2015: A Future Transformed For The Better By Technology

Concluding Thoughts From AppSphere 2015: A Future Transformed For The Better By Technology

It would be hard to imagine a more appropriate speaker or more relevant message than David Kirkpatrick’s closing general session at AppSphere 2015, “The Techonomic Future of Business.” An esteemed alumnus of Fortune magazine, founder and CEO of Techonomy Media, and author of The Facebook Effect, Kirkpatrick described the technology trends he sees shaping the future not just of business, but of everything — and the future he describes is precisely the one AppDynamics was created to support. Smartphones were the start of the tectonic shift toward a world that is fully interconnected and always on. But Kirkpatrick sees those “rectangles of glass” as a “crude technology that we will bypass” as more efficient, more ubiquitous means of interacting with data evolve.

Until then, though, the dominant forces are mobility and the cloud, combining to accelerate the pace of everything, and making user experience and speed the drivers of competitive differentiation. The idea of every company being a software company, a technology company, is no longer debated; it is the reality, and leaders need to figure out how to digitally transform to embrace it, or they simply will not survive.

Kirkpatrick described “the end of industries” as we know them now, with boundaries blurring, entrepreneurship exploding, and smart startups with brilliant ideas able to easily find funding to aim their slingshots at industry behemoths. You can’t have this conversation without mentioning Uber and AirBnB, but there are going to be new examples soon (I hope!); Kirkpatrick throws Tesla in, and Google, too, for good measure. “Software is knitting everything together in a new kind of integrated universe,” he said. It is blurring the distinction between our offline and online worlds, simply taking care of things without our intervention. And like it or not, we won’t have the option to opt out. Sensors, cameras, and connected devices are increasingly surrounding us. We have to hope that the algorithms that control them will be guided by a moral compass that reflects the best of our human values.

So to sum up, what are the big game-changers in Kirkpatrick’s view? The Internet of Things, or the Internet of Everything as he calls it. Augmented reality like the Microsoft HoloLens and Google Cardboard. And innovations like Blockchain, a primary enabling technology for Bitcoin. (It will be interesting to see how those latter two play out.)

The common denominator for all of it is software. And that brings us back to AppDynamics. We have the platform that makes sure the software works. And by “works,” we don’t mean just making sure there are no interruptions, slowdowns, or hiccups in performing the functions all these applications are designed to do. It is also leveraging the immensity of data those applications generate every millisecond to derive insights that make the products better, the interactions more meaningful, and the enterprises behind them more successful. And hopefully in the process, make the world a better place.

Because for us, it’s not just about succeeding in the marketplace and becoming the next great software company, though we fully intend to do that. It’s about leveraging technology  to help create the kind of world we want to live in, and a future that exceeds our wildest imaginings.

For these five days of AppSphere, 1,500 technology experts listened and shared their visions. We inspired and got inspired. And while each of us has our own piece that we focus on in our own companies and enterprises, the common threads are obvious. The common direction is obvious. As we scatter back to our homes and businesses in every corner of the world (every continent except Antarctica was represented At AppSphere, though they must use a lot of software in those scientific stations — next year!), we’re all better equipped to build a future that’s not just more convenient and efficient, but more meaningful and compassionate.

To close, I want to extend our thanks to all of our expert presenters, to David Kirkpatrick for a truly inspiring finale, and to everyone who attended. See you in Vegas again next year! David Kirkpatrick counts Mark Zuckerberg as one of the true visionaries of our time. The ideas in this image are from a letter he wrote to his daughter about his hopes for what technology can do for the world. 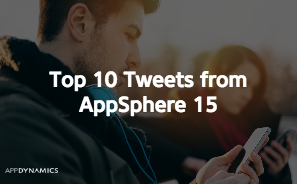